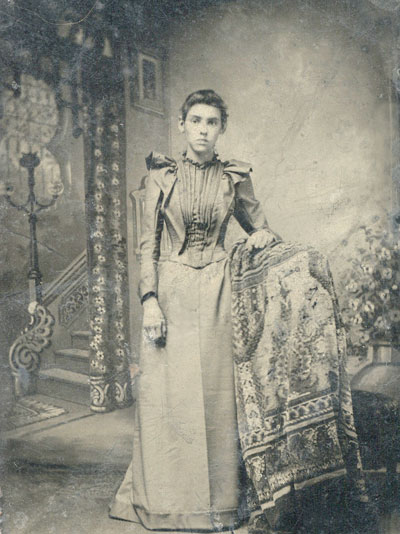 Katie Ellen Fluck Meyers probably taken on the event of her wedding. She was about 16 years old.

By the 1870 Cenuss, Jacob H. Fluck, who would have been about 20 years old, was not living in the household of his parents.

Death Certificate shows Samuel Fluck, age 79, died 7 June 1900 and was buried on 11 June 1900 in the Northwood Cemetery. At the time he was still living in the 19th Ward of Phiadelphia. The certificate states that he was still married.

In home of: William West
Elizabeth Fluck … Mother-in-Law … widdowed … 73, [she had 7 children, 6 living at time of census] This may not be the correct Elizabeth Fluck.

The Souder and Fluck Connection

Katie Ellen Fluck’s mother died before she was 3 years old and in 1880 Census Katie was living with her grandparents Abraham and Leah Souder. Just this morning (July 19, 2011) I connected an old photo I took of a grave in 2004 to Katie’s story and discovered that Katie’s mother was Emma Catherine “Katie” Fluck who died in 1879 (see photo of grave below) and is buried at Little Zion Church near her parents.

Emma Catherine was the daughter of Abraham and Leah Souder, and Katie Ellen was their granddaughter. So all of this evidence pointed to Emma Catherine as Katie’s mother! When Emma Catherine died in 1879 Katie would have been only 2 or 3 years old and then was forced to move in with her grandparents, which is proven by the 1880 census. I took a photo of Emma Catherine’s grave in 2004 at the time feeling positive that there must be a connection and now, seven years later, that connection has “clicked”. (I just live for moments like this!)

On July 3 1880 Jacob H. Fluck re-married, this time to Ellamanda Saylor (Souder) [b. abt 1847], age about 33 years old, both of Richlandtown, by the Rev. H. F. Seiple. Ellamanda was Emma Catherine Souder’s sister. Source: http://www.larryhillpot.com/intell_marriages.htm

I found a family in the 1860 Census that might be a match for Jacob’s parents but have not verified it with any other sources, but I mention it here (below) as a possibility. This Jacob would have been born about 1850, which fits in the time frame of his marriage to his first wife who was born in 1855.